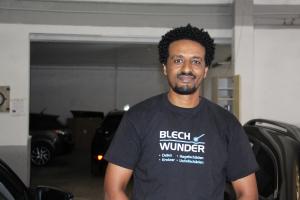 Edel Ashbara (31) fled from Eritrea to Germany in 2013. In Eritrea, Ashbara had previously worked as a helper in the hairdressing trade. In Germany, the 31-year-old started a six-month partial qualification as a vehicle caretaker at BlechWunder Dellentechnik in July 2016 and then found a permanent job with social security contributions at a company in Oberhausen. On 1 May 2017, Edel Ashbara returned to his training company BlechWunder Dellentechnik in Dortmund-Mengende. In addition to his work as a dent technician, he acts as a language mediator between the Arabic-speaking training participants and the trainers. "I am happy that I can work at BlechWunder Dellentechnik," says Edel Ashbara. "I want to do something - and here I feel needed and at the end of the day I feel I have really done something," says the 31-year-old.

BlechWunder Dellentechnik offers certified training to become a dent technician, a smart repair specialist and a vehicle caretaker. Smart dent repair describes a process for repairing dents in vehicles. Instead of removing the dent superficially with a spatula and paint, as is the case with conventional repair, the dent is gently massaged out of the sheet metal using special levers.

BlechWunder Dellentechnik has been offering training in dent technology and smart repair since 2009.

July 2019 it was "Grüß Gott" for our Munich BlechWunder branch.

Since March 2020, there has been the BlechWunder branch in Offenbach am Main. 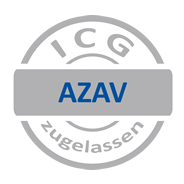 As an approved training provider, BlechWunder Dellentechnik Rüdiger Spies offers you certified training courses in accordance with AZAV in the field of dent technology, smart repair and vehicle care.
Our training can be 100% funded by the employment agency, job centre or pension insurance.

The federal programme Bildungsprämie is funded by the Federal Ministry of Education and Research and the European Social Fund.

With financial support from the State of North Rhine-Westphalia and the European Social Fund.

Start a successful future with us!